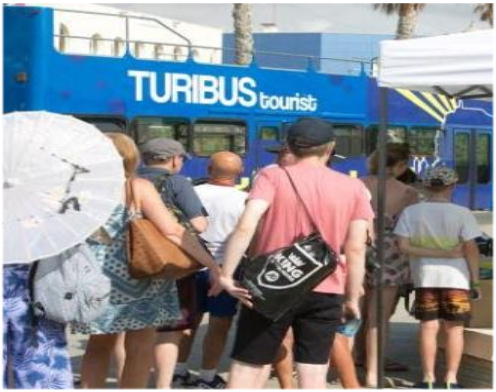 A destination which is open 365 days a year, having 300 of them sunny, with temperatures of 18º, leader in blue flags, an airport which exceeds 15 million passengers a year, is connected with 123 more airports, and the AVE with Madrid. These are the conditions that were presented yesterday as ideas to promote the province of Alicante as a cruise destination in the arch of a day that was held at the airport of Alicante.

The tourist sub-sector in Alicante moves around 5 million euros a year, but it has been wasted, as shown by the fact that only 30% of the cruise passengers who arrive at the port, hire their services for scheduled excursions. According to the report presented by the Provincial Tourist Board, at the conference organised by the Proport Foundation, with data from Alicante Cruise Terminal over the last two years, 151,391 cruise passengers arrived at the port, of which only 45,389 contracted an excursion, with the city of Alicante itself attracting the most excursionists (17,713) followed by GUadalest and Elche, with around 6,000 excursionists.

The goal is to expand this market, as specified by the director of the Provincial Tourism Board José Mancebo, who noted, in this regard, "The ideal is to work within a radius of one hour of mobilization by bus, as it must be adapted to the scales. The proposed objective is to promote industrial tourism and the route of the castles also works very well".

Second destination: Guadalest
The main option for these tourists is Alicante. They value, according to the manifesto of the day, the integration of the port in the city and its heritage resources. Guadalest, on the other hand, is the second destination. Novelda's capacity to attract tourists has increased due to its historical heritage (La Mola Castle) and modernist architecture (La Magdalena Sanctuary).

On the other hand, the director of the Port, Carlos Eleno, appealed to the necessary union of all the administrations, with the common objective of transforming the province into a destination for the cruises and, in this sense, it has been considered as a key factor, to have a powerful connection between the port and the airport. "We have a privileged port, in this sense, because of the very configuration of the city around the castle, which would serve as a defensive axis against possible invasions. It is not like in other cities like Valencia, where the port is 5 or 6 km from the city centre. In Alicante, the cruisers can reach the city centre after a route of 1,500 metres in which they do not cease to see the sea" declared the town director.