Benidorm's indifference to the Brexit 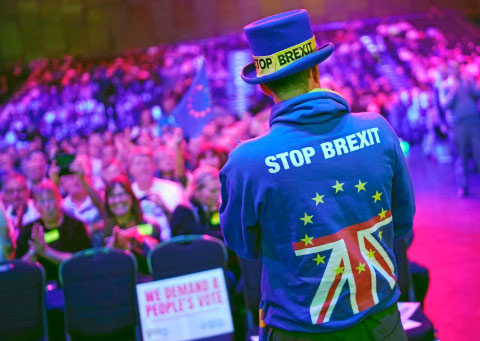 Toni Mayor, the president of the hotel employers' association of Benidorm (Hosbec), said Friday that the departure of the United Kingdom from the European Union (EU) has caused "indifference" in the city to a process that began in 2016 and has been "long" and "tortuous.
In statements to Europa Press, Mayor said that the process has been "uncertain" and despite the fact that he has stressed that he does not like Boris Johnson, the British premier, he has acknowledged that he won the election by an absolute majority and "ratified the agreement he had with the EU".
The president of Hosbec's employers, has predicted the process for the effective exit, which will last "possibly for two more years", has said that it will be "easy" and has denied that it could have a "psychological impact on the consumer". Therefore, although he has indicated that "In the long term no one can know what will
happen", the UK economy, which has a 3.5% unemployment
"As far as we're concerned, we're at a point where we're not bad, the
reserves are functioning normally and some aspects are better than last year's," said
Toni, has defended the "Fortress" of the destiny of the hotel plant, which has
"Updated" and has built up customer loyalty. "We have a mutual infatuation that provides great strength." He concluded

"The Brexit is a pretty ugly divorce... We have to fix it."

On the other hand, Sam Jones, the Guardian's correspondent in Spain since 2016, claims that "Friday was a sad day for me and many more Brits than ever want to leave the EU. But it was inevitable, there was the 2016 referendum and we should respect the vote and the voice of the people. It has been a rather ugly divorce at different times, now we have a year in which we will still be part of this European family. But then, who knows? We should look at how the negotiations are going. There is a lot of optimism on the part of the British government, but nobody knows for sure how and when things will be settled. Someone will have to make an effort. By that, I mean the British Prime Minister. This is what he and many people wanted, now it has to be fixed.

The social division that Brexit has brought about

Jones, the correspondent notes that: "That will take many years to recover. There is a great division in British society, there are families and friends who no longer speak to each other, a little like the Catalan issue. Unfortunately, it will take several years to mend." With regard to the reactions in Spain, he recalls that he arrived precisely on the day of the 2016 referendum, he points out: "The next day, nobody could believe it. The big mistake was that many people believed that the supporters of staying in the EU would win, and they didn't. I remember spending the day in Orihuela Costa, where there are many British pensioners and they couldn't believe it either. Despite the fact that several had voted for Brexit, even those living in Spain, a mentality that is hard to understand, but unfortunately, it exists".


What the Brexit means for Spain

With regard to what Brexit means for Spain and what it can affect most, the
A journalist says, "We always talk about the tourism sector, which is very important here. Last year we already saw a drop in the number of British visitors, which was quite small, and it also affected Thomas Cook. But tourism and many hoteliers are concerned, even though the Spanish government seems to have a plan to deal with the situation. But we will also have to see how it affects other aspects such as Spanish products and exports of goods. People will have to sit down and talk to both sides.