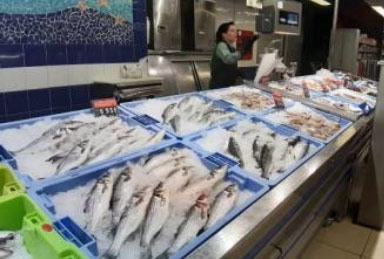 On the rock walk next to the Man of the Sea monument, the expectation is
Although it is not a place for angling, there are several fishermen standing and casting their lines under the expectant gaze of a group of onlookers. Some are lucky enough to catch more than 80 large bass in two days.
The unusual catch, however, has a simple explanation. It is just another consequence of the past "Gloria" storm. The storm and its subsequent waves caused significant damage to aquaculture facilities, dedicated to species such as sea bass or sea bream, which spread off the coast of Alicante, Santa Pola, Altea, San Pedro del Pinatar (Murcia) or Guardamar del Segura. Some of the "cages" have been able to recover with the fish alive, although, hungry, and have been returned to their initial place of installation, thanks to boats that have managed their trawling. On the other hand, there are cases in which they have been unrecoverable and thousands of specimens, free of nets and fences, are disoriented, this has caused losses in many sectors of the provincial coast.

The day, a cage of 38 meters in diameter arrived at a beach in "La Vila Joiosa"
which came from an aquaculture farm located in the waters of Altea; it was
dragged for more than 30 kilometers by the Levante tide. These cages are anchored to withstand the worst of the storms, but they could not give up on "Gloria".
Hundreds of sea bass and sea bream ended up dead on the beaches of the Alicante coast, especially in the Vega Baja area, where the farms of the central and southern coast of Alicante converge with those of the northern coast of Murcia. The specimens that managed to survive the storm, wander hungry and misplaced by the waters closer to the coast with a debris that leads them, for example, the bait that a fisherman with a rod put in front of them on the hook. But not only the fans take advantage of the situation, but also the small sport boats benefit from the occasion.

Purse seiners and small-scale fishermen are catching large quantities of these fish in their usual fishing grounds. In the fishmongers' shops, supermarkets and large surfaces, the increase of these species in the last days can be noticed; in the market, the sea bass is at 3.5 euros per kilo and the sea bream at a little more than 7 euros. The price varies depending on whether they are farmed or not but, logically, the artisanal fleet does not distinguish between those caught in nets and those that are farmed. The Valencian Community leads, at national level, the production of fish species, especially corvina, sea bass and sea bream, with a turnover of 64 million euros. The industry is centered in Alicante, off the coast of Guardamar, where farms occupy just over half a million square meters of water mirror in the sea.

It is not new that there is an episode of these characteristics, The "DANA" of
September swept away the bluefin tuna fattening cages of a Murcian company in the vicinity of the Mar Menor. This is one of the best in the world, which is frozen and transported by air to Japan; but this time they finished on the beaches of Lo Pagán and San Pedro, for the benefit of some neighbors who began to report them. In successive days dozens of rotten tuna arrived at the coasts of Pilar de la Horadada, Torreviejay Orihuela, doned the cleaning services had to be used thoroughly.