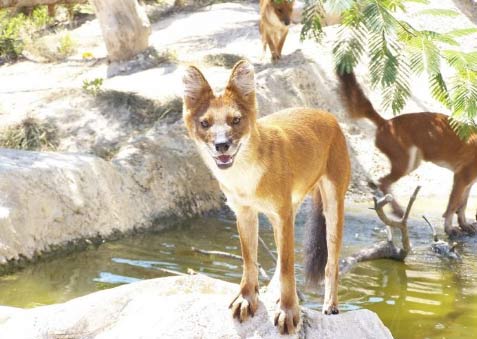 Terra Natura Benidorm, the nature and animal park, has taken part in a study which will allow large-scale genetic monitoring of carnivorous mammals. This project aims, through scientific monitoring, to preserve and conserve the biodiversity of specific species. According to the IUCN Red List of Threatened Species, almost half of carnivores *Specifically 45.2%* are currently threatened.
This Friday, in a statement, the park detailed that the role of carnivores in the balance of ecosystems is paramount, since they occupy a higher position in the food chain which develops in these environments.
For these reasons, it is necessary to implement actions and conservation based on monitoring that can be applied and standardized for the contribution of food to animal populations in their natural environment.
As part of the study, Terra Natura Benidorm has extracted samples of tissue and blood from the group of Dholes (Cuon Alpinus) living on its premises to be analysed in the molecular ecology laboratory at the Doñana CSIC biological station in Seville. The park's participation in this project is part of the centre's strategic lines, which focus on promoting research and conservation of wildlife and its habitats.
Through this type of research, zoos contribute to the conservation of the welfare and continuity of wild animals. Using the data obtained in this study, in which European zoos have also collaborated, a panel with nuclear loci will be set up, which will determine the position of a gene or genetic marker, of the species examined whose purpose is to evaluate genetic diversity.
This project, headed by Giovanni Forcina (CIBIO-InBIO, Universidade Porto) and coordinated by Jennifer Leonard (Estación Biológica de Doñana-CSIC), has analysed, in its first phase, a panel of 30 loci in Iberian carnivores of different families. The panel proved to be suitable for investigating genetic issues in these animal populations. The second phase, in which Terra Natura Benidorm collaborates, tries to extend the initial sample with other carnivorous species such as the Dholes.
This study opens a new door towards the evaluation of genetic diversity and
standardization of molecular tools for monitoring and evolution of biological diversity.

It is a nature and animal park dedicated to the care of animal species, which has more than 1500 animals of 200 different species (98 of which are endangered or protected), 30 conservation projects and 19 reproduction programmes.
Its surface is divided into four areas that represent the continents of America, the Pangea Zone, Asia and Europe, inspired by the origin of the Earth.
The tour through its facilities, makes visitors immerse themselves in the
concept of zoo immersion and otherness, and it is possible to enjoy a wide catalogue of entertainment activities.