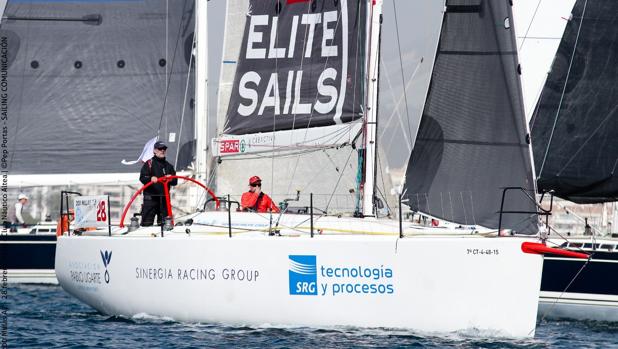 Elite Sails has done it again, after the success achieved in mid-January in another of the hard races of the winter in the Mediterranean as the 300 Miles A3 in Moraira. The Sinergia 40 of the Real Club de Regatas de Cartagena, assembled by José Coello and teaming up on this occasion with Javier Coello, has been proclaimed absolute champion of the 200 Miles A2, a regatta organised by the Club Náutico de Altea, a regatta considered to be the most complicated, hardest and most difficult in the Mediterranean and which is a qualifier for the A2 Spanish Cruise Cup.

Carmen-Elite Sails was one of the 38 boats registered in the Altea regatta, whose start was last Friday, February 28th, at 12.00 pm, with a weak Levantine wind that barely reached 7 knots of intensity. The Sinergia 40 did not start well, with an offline next to José Ignacio Vicent's DKtegoria from Valencia. But what was to be bad luck could be turned into something positive, as the boat opted at this point, after taking the start again, to sail on the right hand side with part of the fleet, and this led to fairly good, free sailing with an asymmetric spinnaker until almost the finish on Ibiza.

The rest of the fleet, who chose the opposite side of the course, were closer to land and found themselves with little wind and a few holes in the vicinity of Altea and Calpe, although they then 'started' again and sailed straight to Ibiza, joining the other group sailing on a charter, which included El Carmen-Elite Sails.