The south of the C.Valenciana covered with snow 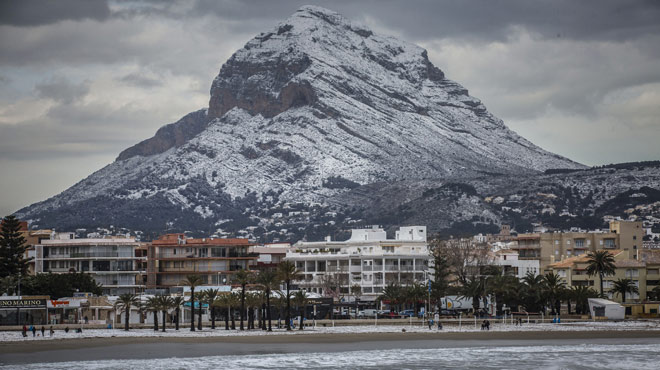 The 'Gloria' storm has left snow on the main peaks of the south of the Valencian Community and also in many towns, mainly in the regions of El Comtat and l'Alcoià.
Since mid-afternoon, rain has predominated throughout the province, especially in the interior and north. The snow level has been between 800 and 900 meters high, in El Comtat and l'Alcoià, although with little thickness, according to the Laboratory of Climatology of the University of Alicante (UA).
Among the points where it has snowed such as Banyeres de Mariola, Confrides, Villena, Penáguila, Guadalest and in high areas, such as the port of La Carrasqueta.
The wind and rain have forced the suspension of classes in several towns such as Denia, Alcoy, Ibi, Guardamar del Segura and Muro de Alcoy

In addition, air traffic continues to be disrupted at Alicante-Elche airport, which between 1 p.m. on Sunday and the same time on Monday has affected 190 flights.
So far, 44 of these operations have been diverted to the airport in the Region of Murcia. At Corvera (25 arrivals and 19 departures), and another 44 at Valencia (22 and 22). At the moment there are no roads cut, although in several of El Comtat and l'Alcoià, there is red level due to snow and ice, as well as in the CV 70 between Guadalest and Confrides, due to the accumulation of ice after the hail.