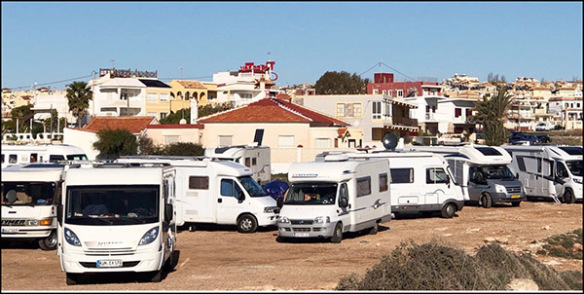 These vehicles will not be able to access the first line of the coast of the district, but they continue to invade the coves

A fence and several pivots prevent, from this week, the passage of vehicles to the first line of coast in the channel of the Acequión of the Torrevieja district of La Mata. The City Council of Torrevieja thus aims to prevent dozens of motorhomes copen this privileged corner by the sea that separates the town from the neighboring Guardamar del Segura. The fence can only be opened for the passage of authorized vehicles, such as cleaning vehicles.

This place was one of the favorites for tourists who carry "the house on their backs", even to spend the night, something that is not allowed because the motorhomes can only stay parked, but not camp or install their owners tables and chairs and other items on the road. And park as long as they do not invade the maritime-land public domain.

However, the "war" of the City Council against the motorhomes that invade the first line of coast, is limited, for the moment, to La Mata. The coves of Torrevieja, from Cala de Los Trabajos to Cala de la Zorra, continue to be occupied, without control, by motor homes, which take over even the smallest corner, despite the numerous complaints from neighbours and visitors. There, the owners, the majority of whom are foreigners (especially from central and northern Europe), place their chairs, tables, hammocks and even sunbeds next to the door of "their house", and unfurl their parabolics to watch television while they enjoy their holidays without paying the corresponding overnight fee that a campsite, equipped to house this type of vehicle, some of considerable size, would charge them. Some motorhomes invade the public domain, on the edge of the cliffs, and others do so in the passage corridor, preventing the movement of people, where the competence belongs to the Generalitat. The Town Hall, meanwhile, is trying to find a solution with Costas, which has not yet arrived.