Visit the Costa Blanca all year round 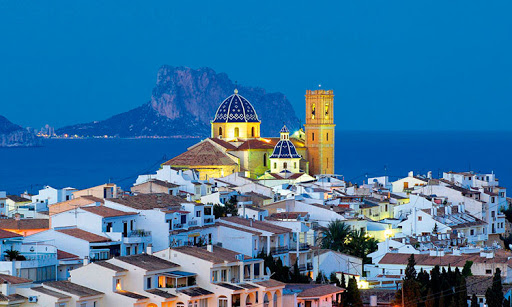 CostaBlanca is the tourist name given to the more than 200 kilometres of coastline in the province of Alicante, in southeastern Spain. The Mediterranean Sea bathes, with beaches and coves, this privileged area that runs from north to south, from Denia to Pilar de la Horadada, with a total of 19 towns.

The most beautiful corners of the Costa Blanca

Altea is a municipality on the Costa Blanca located in the southeast of Spain. It belongs to the province of Alicante, is about 55 kilometres north of the aforementioned capital and about 130 kilometres south of Valencia. It has about 22.000 inhabitants registered in its Town Hall.  Altea la Vella is a hamlet of the main Town Hall. This place in the Marina Baja, situated between the sea and the mountains, was the origin of the current town. It is located about 3 kilometres to the north of the town centre and its beautiful white houses stand out.

Calpe is a town on the Costa Blanca dedicated mainly to tourism. This Spanish town is located 64 kilometres north of Alicante and 122 kilometres south of Valencia. It is located next to its famous rock (Ifach) and on a high point coming from the last foothills of the Sierra Bernia, a spectacular geographical feature that allows a link with the southern villages of La Marina alicantina.
It is an authentic tourist town, which has a coastline of fine sandy beaches with stretches of cliffs and some old salt pans.
Along the promenade there are remains of a salting factory built by the Romans. Its many hotels offer the visitor an ideal place to enjoy the sun and the beach.

is a municipality on the Costa Blanca largely dedicated to tourism, located in the southeast of Spain, some 93 kilometres north of Alicante and 105 kilometres south of Valencia. Discovering Denia is a pleasure, because it is a city full of life, colour and Mediterranean joy. And this is reflected in its streets and its people, radiant and simple. Denia welcomes you with open arms, because it knows how to welcome travellers and make them feel at home, and it receives many visitors, among other virtues, because it has many hotels on the beachfront.

Guardamar del Segura is a municipality on the Costa Blanca located 35 kilometres south of the city of Alicante, in whose municipal area the Segura river flows into. Its Town Hall has a population of approximately 17,000 people.
It has a total of 11 km of fine sandy beaches which make it one of the most beautiful coastlines in Spain. Guardamar is especially known for its sand dunes which are located in an area of special protection and conservation.
The pine forest located next to the town centre covers an area of 800 hectares and was originally a set of mobile sand dunes, which were fixed through the planting of various plant species such as pines, palm trees and cypresses.

Villajoyosa is the historical capital of the region of "La Marina Baixa". This seaside town and tourist destination is located on the Costa Blanca, in the southeast of Spain, 33 kilometres north of Alicante, a city that can be easily reached either by the AP-7 motorway or by train. The town council has a population of around 33,000 inhabitants.