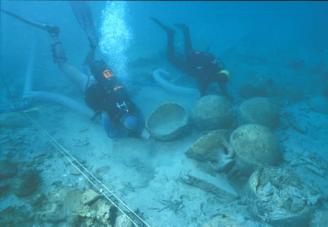 Frequently, the fishermen who worked in the bay of Alicante collected vessels and remains of ancient objects with their nets, which, once on land, they sold to collectors. On April 3, 1897, the newspaper "El nuevo Alicantino" reported that these amphoras were usually sold for 5 euros each. These finds were more frequent in the Albufereta, where the port of the Roman city of Lucentum was said to have been.
The free trade in amphoras and ancient objects rescued from the sea was prohibited by the Artistic Treasure Law of 1933. One year earlier, on January 17th 1932, the "Palacio de la Diputación Provincial" had been inaugurated, on the ground floor of which was the "Museo Arqueológico Provincial de Alicante".
Although in the press appeared news at the end of the nineteenth century about the collection of ancient objects in waters near the "Isla de Tabarca", was the father Belda, José Domínguez, who led in 1958 the first underwater archaeological survey of the island, along with divers from the town. It was discovered to the northeast of Tabarca a "Roman amphora field" with a length of 350 meters long, by 150 meters wide at a depth of between 2 and 4 meters. Moreover, the Tabarca people informed Father Belda about the existence of more amphorae in the nearby islet "La Nau", among the oceanic posidonia prairie. These objects were rescued and transferred to the Provincial Archaeological Museum. The amphoras of underwater origin from different periods were also deposited there, which were bought in 1971 from the old ceramics museum owned by José Ramón Quiles in Toledo Street.
Being May 1973, twenty divers of the "Grupo de investigación subacuáticas de Educación y Descanso de Alicante" rescued a Roman anchor in Tabarca areas. Between 1985 and 1987, Asunción Fernández carried out underwater prospections on the island, recovering amphorae of Roman typology in the eastern end and others whose typology was uncertain
Five years later, after the approval of the "Statute of Autonomy of the Valencian Community", which included the exclusive competence of the Generalitat for archaeological heritage, the regulations on underwater archaeology were developed by the order of 31 July 1987.
In 2000, the new MARQ was inaugurated, located in the old building occupied by the hospital of San Juan de Dios. After two years, the room dedicated to underwater archaeology in the museum was inaugurated.
On 2 November 2001, the UNESCO Convention on the Protection of the Underwater Cultural Heritage was celebrated in Paris, creating a "Scientific and Technical Advisory Body" which met for the first time at the National Museum of Underwater Archaeology in 2009.
In 2002, with the channelling of the Albufereta ravine underway, vestiges of the Iberian wharf of the "Tossal de les Basses" and the "Roman Port of Lucentum" were discovered. In the same year, a Roman wreck (also known as El Guanche or Albufereta) with amphorae and a ton of circular copper ingots was found near Almadrava beach.
Thanks to surveys promoted by MARQ, in 2005, 84 Roman copper and fleece coins from the first half of the 4th century AD were found in Albufereta, as well as two more modern coins from the Cabo de la Huerta: El llamado de las Pizarras (since it was carrying packages of this material), a pailebote from the mid 19th century, approximately, and Sillares (for carrying 19 large ashlars), between the 15th and 17th centuries.
After the discovery in 2007, as a consequence of the works the emissary of residual waters, of Roman vestiges between Santa Pola and Tabarca, some prospections were carried out in later years that served as rescue of remains of amphoras in the denominated place of "Freu de Tabarca".
In June 2011 MARQ catalogued for the first time underwater remains from up to World War II.
In 2012, near San Gabriel beach, a split iron cannon was found, belonging to the 17th and 18th centuries. One year later, MARQ archaeologists found a Roman anchorage near Tabarca anchorage.
Source: newspaperinformation